Bring Back the Glossy Black 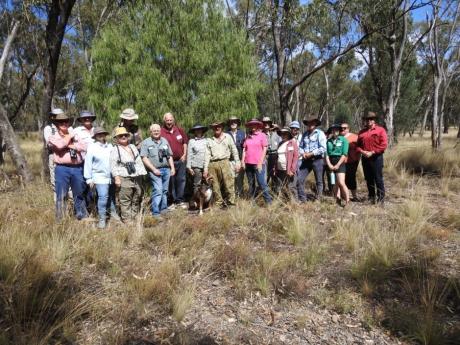 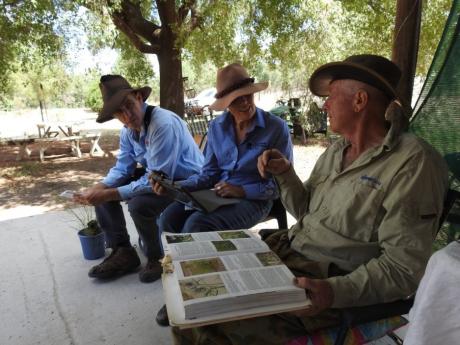 On Thursday the 24th of March Murrumbidgee Landcare and Biodiversity Conservation Trust held a Bidgee Biodiversity Day. One of six in the Riverina to create awareness of the need to improve biodiversity in the region.

Murrumbidgee Landcare along with the Murrumbidgee Field Naturalists and Narrandera Landcare thought a Glossy Black-Cockatoo (GBC) day would be a valuable way of celebrating biodiversity in the district.

Gathering a team of people who have been involved in the monitoring, protecting, research and understanding of the Glossy Black-Cockatoo was one of the aims of the workshop. Understanding what has been done in the past will help us to determine what needs to happen in the future.

Rankins Springs farmer and Naturalist Rodney Guest started the day telling us about farmers in the Rankins Springs region who have been involved in educating the local community (Farmers and School children) in the habitat required for the GBC.

They installed large nest boxes made from recycled material with cherry pickers 6 meters high in large Eucalypts to hopefully attract the GBC to the nest. Being so high they are very difficult to monitor which has been a problem for the evaluation of the idea. Major Mitchells have been seen nesting in smaller versions that have lids. But at this stage no GBC has been found in the larger open topped ones.

There have been times over the past 20 years where up to 95 GBC have been counted at the annual Glossy Black Count in February. This involves people sitting on the edge of dams dotted over the Rankins Springs area recording visitors to their allocated dam.

Nella Smith spoke about the GBC population in the Narrandera, Brobenah Hills and Cocoparra National Park areas. She believes the population has stayed quite steady around the 30 mark varying over the years due to drought when numbers recorded were as low as 4.

MFN started monitoring the GBC in 2000 and also installed nesting boxes to attract the birds. Clearing of large trees that would normally provide homes for these birds has been a major problem in this area. The birds are known to travel 12-15 km from their feeding area to nest.

Matt Cameron provided a wonderful presentation on the GBC. He has spent a lot of time researching the GBC. One of his papers is on ‘Group size and feeding rates of Glossy Black-Cockatoos in central New South Wales’. He spoke about the need to plant as many of the feed trees as possible to provide feeding sites for the birds as the risk of trees drying out during droughts is very real. Climate change is shaping up as one of their biggest threats.

Planting trees on the slopes and better soil areas would provide a safety net of feed for the Glossies who are quite happy to travel to find food. They are very selective feeders and in this area are most likely to feed on the Allocasuarina verticillata.

The birds are very social and like to nest in groups so placing nest boxes in groups would be an option. Glossies produce one egg per year and juveniles stay with their parents for up to 18 months so they can learn to feed themselves by cracking open the cones.

It’s tricky to get the seed from the cone. Matt explained how the birds like trees that are high yielding, and those trees are the preferred trees for collecting seed for nurseries. Chewings are often found at the base of these trees. The colour of the chewings can indicate how long since the birds have been feeding on the tree. More colour means fresher chewings in general while the pale colours are faded older ones. They range from orange through yellow and eventually to white.

Andrew Thompson provided a great opportunity on his farm ‘Yarrabimbi’ for attendees to walk through the GBC country and see the trees the birds feed on and the cones they eat. This property which has a Property Vegetation Plan has benefited greatly from Andrew’s dedication to weed and feral pest management allowing the growth of local endemic species to establish and flourish.

This biodiverse vegetation provides a home to birds like the Painted Buttonquail and Diamond Firetail which are both birds seen in good quality woodlands.

Peter Beal who was a Soil Conservationist prior to his current position with Local Land Services (LLS) spoke of the thin and somewhat fragile soils that cover the hills and the need to protect them (as Andrew is doing) to reduce runoff and erosion in the hill areas.

Andrew along with Mason Crane and Colleen O’Malley from Biodiversity Conservation Trust treated us to a guided tour of a portion of the farm where we discovered plates created by the Painted Buttonquail, Rusty Spider Flower Grevillea floribunda, and Butterbush Pittosporum phyllireaoides which Andrew had fenced for protection.

Glenn Currie from Narrandera Landcare along with wonderful volunteers have grown 1000 Drooping She-oak Allocasuarina verticillata to give away to farmers and Landholders in the area. Trees and tree guards are all free. Contact Glenn via email on narranderalandcare@gmail.com See next page for details.

If you’re interested in protecting your patch of paradise on your property and being paid to do it contact the Biodiversity Conservation Trust on info@bct.nsw.gov.au or phone 1300 992 688.

Thanks to all those who came to share the day. To Andrew and the speakers who provided us with a wide range of experiences in the conservation of Glossy Black-Cockatoos, woodland birds and the beautiful plants that choose to live in this sometimes harsh environment.