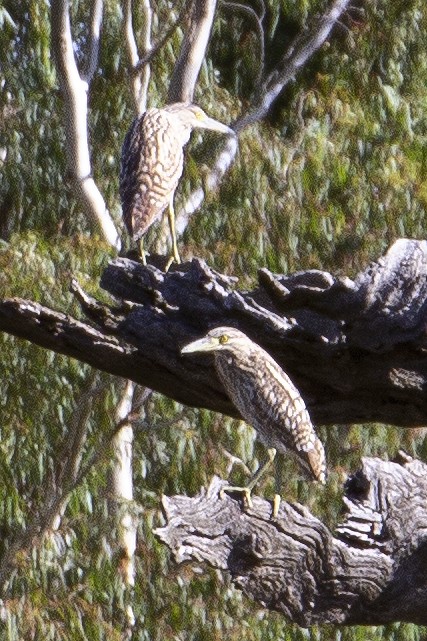 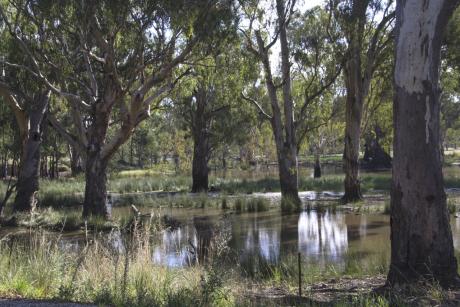 Early Autumn is a lovely time of year for an afternoon of birdwatching; and Sunday March 13 didn't disappoint. A still, warm day favoured our little convoy as we headed south from Narrandera to a scenic string of wetlands in the general region of the Narrandera Inland Fisheries Research Centre. At our first stop we were greeted by a variety of swamp denizens; like a couple of juvenile Night Herons; a Great Egret; some Black Ducks, and several White Ibis.

Quite a few bush birds flitted through the canopy of the towering River Red gums standing sentinel over this tranquil scene. One welcome arrival was a Peaceful Dove, who surveyed us curiously, anointed our senses with one of bushland's most sonorous calls, and continued on its way.

There were also quite a few White-plumed Honeyeaters frolicking in the treetops, also singing beautifully; as was a Grey-shrike Thrush.

But Betty's gimlet gaze was fixated on more lowly things, like a large fan-shaped lichen growing on the bridge rails – which she generously described as “magnificent”. What was probably more magnificent was the Superb Parrot she and Warrick spied on our way to the next stop.

The River Gum vistas here too were Hans Heysen-esque in their splendour – every one a masterpiece. Again the still, perfumed air was filled with birdcall, from such maestros as Pied Butcherbirds; Kookaburras; Little Friar Birds – and even the keening of an aptly-named Whistling Kite. Here too – though sans song – was observed both Royal and Yellow-billed Spoonbills, quietly preening in the soft, afternoon shade.

Our next stop (not much walking on this outing) was a more open but extensive body of water, most of which wouldn't exist in the absence of good recent rains. But rains we've had, which invited visitations from avians aplenty; such as Black Swans; Great Crested Grebes; Great Cormorants (Nella reported a  hundred or more of these impressive birds in the same area the following day); and best of all a White-bellied Sea-Eagle, being harassed by lesser birds – as usual!

A small mob of Eastern Grey Kangaroos browsed happily on the far water's edge, with one large buck coming down to drink. There was even a sizeable flock of waterbirds skittering around on the lake's surface, which Nella later identified as Hoary-headed Grebes: a rare sighting in such numbers. As well, there were a couple of resident Darters, and many Wood Ducks.

Then to our supper stop, a fisherpersons' shelter bathed in the golden light of the setting sun. This was on the bank of the mighty Murrumbidgee River; which was indeed flowing mightily. Nella's (rather optimistic I thought) enticement to us to visit this site was the chance of hearing a Barking Owl. Alas, after sounding out the attraction call, we were visited only by a family of White-winged Choughs; obviously flying in to find out why a potential nocturnal marauder was trespassing into their territory.

Another non-attendee was a Platypus, which we hoped would make a showing in the gathering dusk. (And thank you Nella for organising such a lovely afternoon.)

One resident that did make her presence known (Yes, it was a “her”.) was an impressive Golden Orb Spider, which draped her splendid web right over one of the picnic tables. As well, also taking advantage of the shelter of the Shelter, was a Peron's Tree Frog chirping away – and some seriously large nests of both Paper and Mud Dauber Wasps.

As an indication of our small assembly's eclecticism, we spent some time discussing the merits of the various gnarled eucalypts across the river as sketching subjects. These were perfectly displayed in a palette of ochres and shadow-greens in the slanting sun's rays, and reflected in the water. It's not all about birds, you know!

Our final image of this serene scene was of a solitary White-faced Heron stalking to and fro along a fallen log on the river's edge. Obviously it was hoping for a before-bed treat prior to twilight finally closing in.