Fivebough Wetlands – where are the birds? 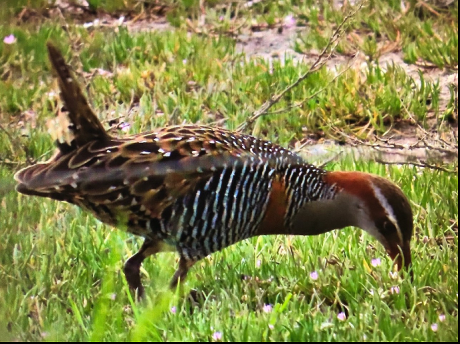 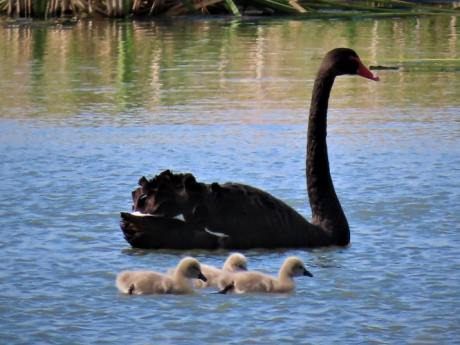 To the casual one-time visitor, Fivebough would appear to be pretty birdless as so many people have commented to me over the past month. However, to the keen observer and almost daily visitor, things are not as bad as they seem. Before lockdown, I had been frequenting the wetlands seeing what birds come and go and since we have restrictions in place in Covid-free Leeton, I have continued using the area as my ‘exercise’ area. Since then, Fivebough has been a mecca for dozens of people using the wetlands for the self-same reason as I do, namely, to exercise.

These days it is not uncommon, especially at weekends, to find a dozen or more cars parked along Petersham Road with family groups doing the circuit but not really taking much notice of what they see. There are, however, a very dedicated group of daily birdwatchers, like me, who go to see what changes have occurred and what new birds have come in and which ones have disappeared.

There was great excitement when a family of Magpie Geese ended up in the main northern pond with 10 goslings in tow! They were there for several days but on Monday the 23rd of August, they were nowhere to be seen and since then have not reappeared. What happened to them is a mystery as a fox or two couldn’t take all 10 goslings overnight nor would the 4 accompanying escort adults allow that to happen as they are very defensive of their young. If they were moved it is inconceivable that the 10 chicks could have been moved any great distance. So their disappearance remains a complete mystery. The regulars still hope they will reappear but so far that hasn’t happened so I suspect they have departed the wetlands – where to is anyone’s guess.

A similar regular watch is kept on the nesting Black Swans, which have been endeavouring to nest in the middle of the northern section of the wetlands. Some have been successful and there are quite a few with cygnets that are not that easy to see from the pathways unless you have binoculars or a good camera. The original clutch of 4, now down to 2 survivors, are rapidly taking on adult plumage whereas most other clutches are of varying size with fluffy smoky-grey down still.

Foxes are ever-present and are very bold in wandering about in broad daylight with people everywhere. So, I suspect a number of swans nests have been raided by them over the breeding period as there are quite a number of abandoned swans’ nests in the open water. Keith Hutton feels that some go through the procedure of nest building but don’t actually go through with egg laying and incubation. And a pair in the main northern pond as seen from the first viewing platform have only just mated and taken an interest in their nest which they constructed in July – a very late starter! They’ve obviously given raising a family a lot of thought!

Apart from the obvious Magpie Geese and Black Swans, the wetlands have a lot of surprises in store for the observant birdwatcher with plenty of time to spend waiting patiently for the more elusive birds to show themselves. Birds like crakes and rails are present in numbers and if you stand long enough, you can hear them calling all along the tracks. One site has been very productive at the spot we refer to as the T-intersection where the Brolga sculptures are. Many have been rewarded with good views of Spotted and Baillon’s Crakes as well as a very co-operative Buff-banded Rail providing you stand still long enough for them to show themselves in the open. Also, the more secretive Spotless Crake is heard frequently but rarely shows itself -the very loud ‘whirring’ in the reeds right beside the track being the only indication of their presence.

I have met up with Anne Lepper on many occasions at the wetlands and she is a very keen photographer who is absolutely besotted by the antics of the wrens – Purple-backed and Superb that occur all around the pathway and at the Petersham Rd carpark as well. My car has evidence of them ‘attacking’ themselves in my rear vision mirror leaving their deposits behind on my door!

The migratory waders are just beginning to return. I, along with Anne, saw a small flock of Sharp-tailed Sandpipers, about 12 or so birds. They were on the eastern side of the T-intersection but landed in grass and we couldn’t get a look at them on the ground. I saw them again that afternoon in the same spot but they haven’t been seen since. No doubt, they used the place as a stopover to refuel after their epic journey from their breeding grounds in Siberia and then fly further south to Victoria – possibly to Werribee Wetlands. Also seen, and photographed by Anne were two Latham’s Snipe. They too, only stayed a day as they haven’t been located since. They were seen just near the T whilst we were watching 4 Black-tailed Native-hen feeding with the loads of Purple Swamphens.

The other casual visitors to the wetlands are 3 and sometimes 4 Brolgas. They have been absent for quite a while but reports have been made of them being seen in the area. So it was very pleasing to see them on a couple of occasions in recent days during this last week of August.

One other unexpected bird to appear was a juvenile Banded Lapwing. Again, Anne was able to get a photo of it. It stayed around for just 2 days and hasn’t been located since.

Finally, at the settling ponds, there have been 10 or so Freckled Ducks along with a pair of Pink-eared Ducks and up to 4 Blue-billed Ducks basically for most of the month. Both Magpie Geese and Black Swan have nested there in the reeds but once again, the young seem to disappear after a few days. Perhaps the parents move them elsewhere or worse still they become victims of foxes or raptors. Raptors I can accept but foxes no!

I have, in this article, concentrated on just a few species but there are lots of others to see in walking around the wetlands. I did a count on 26th August and reported 57 species on the eBird site so there are still plenty of birds to be seen there.