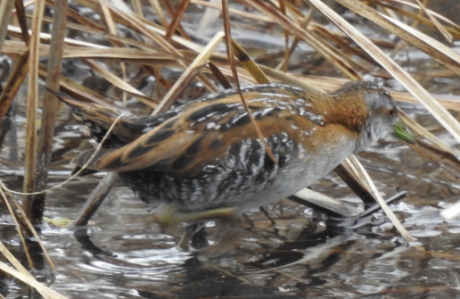 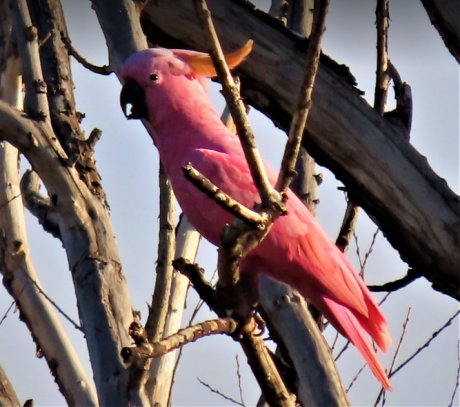 A female Red-winged Parrot was photographed by Anne Lepper in her front garden in Catalpa Road on 15 June. She was quite surprised and submitted the photo to Australian Native Birds site on Facebook. It has been seen in her garden daily ever since, both morning and late afternoon often in the company of 8 or more Superb Parrots feeding in the same trees – Chinese Elms.

There was much discussion on Facebook about the bird and it appears that the bird escaped from an aviary in Wamoon when the cage that it was in blew over and the door came open releasing the bird. It was reported that 2 birds a male and female escaped but only the female has been sighted.

This bird is native to northern NSW and is found further north than here. There have been sightings of this parrot in Merriwa in the Upper Hunter which is unusual to be that far east of its normal range.

When my father was alive and I visited in Tamworth, I would often see them along the road just out of Coolah heading north. This is possibly the southern end of their range and they are very common in western Queensland and the Northern Territory with birds easily seen around Darwin.

A sad post script to the above. I just had a call from Anne (Sunday 27/6/21) that she found the parrot dead in her garden. It showed no sign of being attacked nor was it thin from lack of food so she doesn’t know why it died – very sad.

These parrots which are very abundant in our area in the Spring and early Summer tend to disperse after breeding locally. They are generally not easy to find at these times of year but in the past few years, small flocks can be located particularly at the Leeton Golf Course and, this year, in Anne Lepper’s garden! Up to a dozen birds have been regular visitors to her Chinese Elm trees feeding on the seed pods. I have also seen them in Acacia Avenue feeding in the same trees along the street.

Anne put the photo of the male bird (see photo) on the Australian Native Bird Facebook website and got over 600 likes! They are really lovely birds and always a pleasure to see. We are fortunate to have them here for all to appreciate. They are known by the locals as Green Leeks and as Barraband Parrot by aviary breeders.

This bird has created another flutter of reports on Facebook as it moved around Leeton in a flock of normal birds. I first came across it when doing some birding in the golf course on 7 May. I thought I’d “discovered” a new species! From a distance it looked like a possible cross between a Galah and a White Cockatoo as the colour from a distance was similar to the Galah pink. However, on close inspection, it was bright pink all over – even its yellow crest was pink! Several golfers told me it was already on Facebook and that the story was that someone actually dyed it bright pink and released it. I’m not sure if it had been a caged bird or a wild one that was caught, but it was certainly striking to see flying with the normally white cockatoos.

Again, the bird appeared in Anne Lepper’s garden and she photographed it. The last time I saw it, it had faded noticeably so with the recent rain, the dye might have been washed off and the bird is getting back to normal colour!

On 2 June Phil and Kathy Tenison photographed a Baillon’s Crake below the first viewing platform at Fivebough Wetlands. This is very unusual to find this bird locally in mid-winter. They are a very migratory species and usually turn up in wetlands in the Riverina around early-spring and depart in late summer. So, it was quite unexpected to see this crake at this time of year. I managed to see it a couple of days later and Keith Hutton also saw it in the same spot. Around this time, I also saw several Spotted Crake and two Spotless Crake. So, despite the higher water level in the usual crake spots at Fivebough, they are still about – just difficult to get onto!