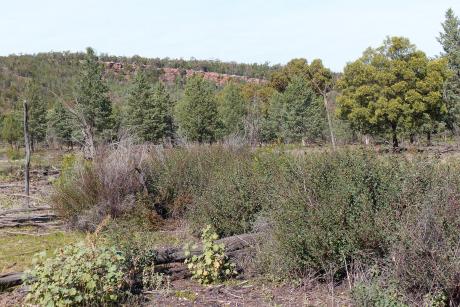 My original intention for this walk was basically follow the route we used to do some years ago but in reverse with the proviso of back-tracking from a lookout point instead of having a steep descent down to the creek above the picnic ground.  A quick reconnoitre with Rowena to check the best point to start the climb up the ridge found the lower slopes thickly covered in Purple Burr-daisy – no purple, all burr.  Two hours of pulling spiky bits out of trousers, socks, shoes, laces and at time fingers, said that plan B was required.

So the six of us that turned up (this most welcomely included the Ranger, Jess Murphy who wanted to learn from us more about her park) had a more leisurely stroll around part of the Flats.  The first part of our walk followed the foot of the cliffs to the end of the spur. Jess soon revealed her interest in butterflies when a couple fluttered by, only Common Browns and they scarcely settled on anything much to the chagrin of the photographers.  They did however spark a discussion on insects and other smaller things in life.  Why don’t we pay more attention to these?

Near the toe of the spur we took a small diversion back to an elevated open rock to get a view across the Flats to the Bluff.  Not as good as from higher up but still worth the deviation, though a few more bird sightings helped.  From the toe, it was a bee line across the valley, crossing two creek lines that at this point are scarcely entrenched and so easy to negotiate.

Woolshed Flats prior to becoming a National Park in 1969 were open farmland that had presumably been cleared. In the area we passed through Deanes Wattle Acacia deanei had regenerated to a fairly complete coverage but the millennium drought decimated them.  The result is a very open landscape that introduced weeds have taken advantage of, but not completely. We were delighted to find a few bushes of Western Golden-tip Goodia medicaginea, a yellow flowered pea-bush that is a true ephemeral pioneer plant and rarely recorded.

Not all of the trees on the flat were cleared. A few grand smooth-barked giants suggested River Red Gums or possibly Blakely’s Gum.  If there were any buds or fruit to confirm ID they were way above us until later one branch with buds was accessible.  The trees were Yellow Box that had outgrown their tell-tale skirts of rough box-bark.

A short distance up the entrance track took us to the Pines Picnic Ground nominally for a comfort break, though all opted to walk up to the Falls.  There was no water flowing, it takes recent heavy rain to get a flow.  Nevertheless they are always worth the short walk up to them.

Then it was a matter of principally following the track back round to Ironbark Picnic Ground for lunch. As a finale we drove up Mt Bingar to check out the Pomaderris there. They are coming back fairly well thanks to regular culls of the goats.  And with that pleasing note we departed for home.