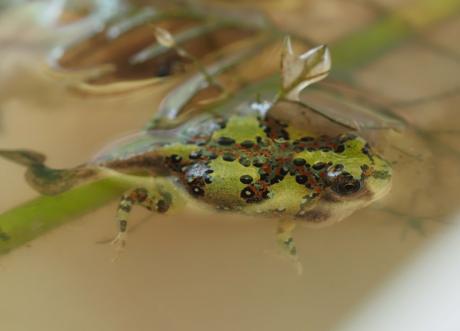 Nella and myself have been taking advantage of the wetter than usual summer to see what frogs are around Narrandera this year. A few locals have joined us on our forays and have enjoyed learning about frogs and the Frog ID app.

We’ve been using the Australian Museum’s Frog ID app on an ad-hoc basis for a couple of years now to record frog calls. We then submit them and get them verified. This is a great and simple Citizen Science project anyone can get involved with.

We’re fairly familiar with the calls of about six of the common frogs of the area and where we can find them, but the more we looked this year, the more we learned.

Our visits to Narrandera Wetlands were positively quiet on the frog front this summer. This is excellent habitat and is usually rewarding but for some reason the frogs weren’t particularly vocal this year. The frogs we heard were less than the usual ones we expected and not in any great numbers.  And our visits to Rocky Waterholes didn’t seem to have any frogs calling at all!

On our drives through the old quarry site on Bundidgerry Hill  we were surprised by the number of frogs calling from the puddles which had filled from the summer rain. Among the various species we recorded many Uperoleia rugosa Wrinkled Toadlets. We hadn’t recorded this one before so it was unique to us. It’s not endangered, or particularly special, just having a good year I guess.

Our most surprising site was a small bog on another part of Bundidgerry Hill. Nella was furious at the local hoons who have been driving through this bog and we’ve had a few discussions about whether they’re destroying habitat or creating it. It really is debateable!

What is un-debateable is the amount of frogs we heard there. It was the richest site we visited this summer. After stopping the first time we heard, to me, some very un-froglike calls. Nella was sure it wasn’t a bird, so we recorded it and the Frog ID app suggested Notaden bennettii Crucifix Frog was a possible match. The Frog ID experts verified this afterwards. This is another frog which isn’t rare, just one we hadn’t heard before. Where have they been for the last two years? If you observe one, the cross on its back makes it very recognisable.

We recorded 5 other species from this patch and can just wonder why this “4wd torn up bog” yielded so many more species than our “tended” Wetlands. We usually just record the frogs to record their presence but at this site we “hunted” down and photographed Peron’s Tree Frogs and Spotted Marsh Frogs. We found the Peron’s two nights running in the same tree which was interesting.

Nella returned there the next day and collected some tadpoles which she gave to a local schoolteacher who involved her class with growing these taddies into Crucifix Frogs. As of this week these tadpoles are virtually frogs (with tails!) and have been returned to where they were collected from.

Frog calls are more prevalent around rain events as part of their breeding cycle. This summer our best night recording them was actually as it rained. Their calls dropped off dramatically on the subsequent nights.

Apart from becoming familiar with a couple of new species this year, I really enjoyed introducing a few new people to the Frog ID app.