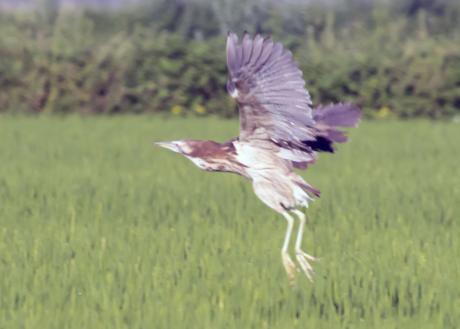 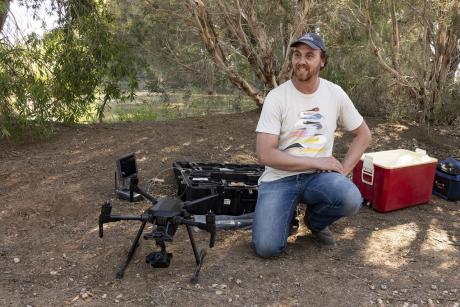 Anna Wilson (Local Land Services) and Matt Herring invited members of the MFN to visit a rice farm and to see firsthand the latest methods used by Matt in locating bittern nests in the rice crops.

Fourteen members took advantage of the invitation and on the Saturday morning (23 January) we all met outside the Andreazza Farm at Wilbriggie and moved in convoy after car pooling behind Matt and Anna around the rice fields to see if we could find any bitterns. We were very fortunate as not long after starting, a bittern flew out of the first rice bay and most of us had a good view of the bird flying off. One other bird was seen flying and several were seen with their head sticking out above the crop during the drive around. Everyone managed to get some good views of the birds and several got some good photos.

Back at the farm house, we stopped for morning tea which Anna generously provided and Matt showed a video of the use of the infra-red camera had which is attached to a drone. Despite the warm morning Matt was able to fly the drone over the rice crop and showed us how the infra-red camera can detect warm-blooded creatures in the area. The best time to use the camera is at dawn and dusk when the temperature difference is greater and the warm-blooded birds can be easily located. Matt was excited as on the previous day, he located a nest in one of the bays that had a young chick in the nest – the first he'd found this season.

Anna also gave a talk about the Growing Bittern Friendly Rice program that they have set up over the last two years and are very pleased that so many farmers have signed up to the program. This year they have 11 local farmers subscribing to the program which is enough for Matt to cope with at this early stage of the program. The basic commitment is to ensure the farmers agree to keep the water on their crop for a set number of days (up to 150) before draining the bays and drying out the crop for harvesting thus giving the bitterns plenty of time to breed and fledge their young before the harvester moves in. Added to that is a requirement that there is no spraying of the banks between the bays to ensure the young birds have a good refuge to go to a week to ten days after hatching.  This means that the banks have a tall growth of weeds and rank grasses to help protect the young birds from predators like foxes and cats.

The bitterns usually wait for up to 2 months after the rice is planted and delay their usual nesting time until the rice has sufficient height for them to 'hide' in. Another important aspect of this delay by the birds is to allow sufficient time for their prey of frogs, tadpoles, fish etc to build up in the bays so enough food is available for them to successfully nest without the brooding female having to fly off further afield to find food.

We are very grateful to Anna and Matt for inviting the MFN to see first hand what the Growing Bittern Friendly Rice is all about – it was a wonderful morning both for seeing at least 5 bitterns and to have the drone demonstration and on behalf of the members who attended I sincerely thank them for such a privilege to see the program first hand.