Parrots of the Riverina 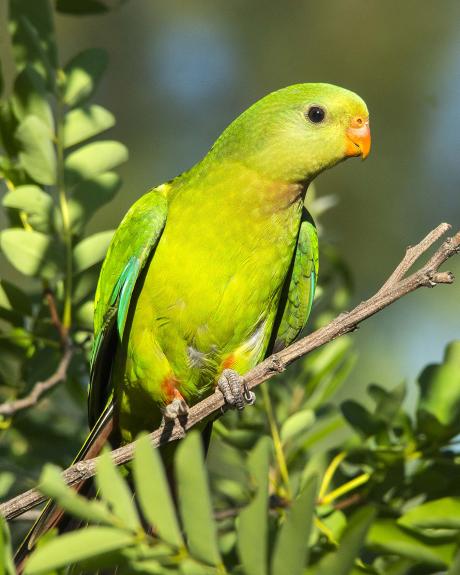 Few places, if any, in other parts of the country can boast of so many without travelling a long distance to see more. What is of concern though is the difficulty these past few years in tracking down what once was easy-to-see species like Turquoise and Mulga Parrots. The Mulgas are still about but not in the numbers they were a few years ago prior to the last drought. With Wattle Dam dry for the latter part of 2019 and the early part of 2020, these once common species seem to have moved elsewhere. Even with the local dams now full, the birds are still not being seen in the numbers they once were.

There is one exception and that is the Superb Parrot which has been around the Leeton area all year albeit in much reduced numbers compared with the present Spring and Summer. Once it was almost impossible to find any even along the river in late Autumn and Winter but now a small number can be seen regularly in the Leeton Golf Course all year. When I first came to live in Leeton and took part in the annual Twitchathon, Superb Parrots were always a bogey bird as by the time of the competition in late October, it was still difficult to locate any. Now, they can be seen flying over town in small flocks of up to 10 birds at most times of day since early September.

Over the years, I have associated our local area by the common species peculiar to each town – Narrandera for Yellow Rosellas, Leeton for Superb Parrots and Griffith for Mallee Ringnecks. Although these days Griffith is becoming more famous for Rainbow Lorikeets which seem to be ever increasing in numbers and are extending their range and are now regularly seen in Narrandera with even a few pairs here in Leeton.

Another species that seems to have 'settled' in the Leeton area is the Major Mitchell's Cockatoo. Thanks to the Walnut Orchard on Colinroobie Road just out of Leeton these beautiful birds are reasonably easy to see in the early morning and late afternoon. There is, as I write, a pair nesting along Colinroobie Road and can be seen when driving past its nest tree.

Other parrots that are not always seen in town but can be seen along the river are the two Corella species – the Little and the Long-billed Corellas. Species that are seasonal and turn up in the Spring are Cockatiels and Budgerigars – both of which have been seen in small numbers in recent weeks.

In all, there are 17 regularly seen species of parrots in the Riverina with the odd sighting of others like Musk Lorikeets and Swift Parrots which visit briefly when the food source elsewhere is not adequate.

Another rare visitor is the Blue-winged Parrot which used to visit Tuckerbil in years past but has not been seen for some years now. Maybe because Tuckerbil has been dry for several years is a possible reason for their non-appearance.

Paul Johnstone, who the Sri Lankan trip people know, has just done a trip out this way visiting Round Hill and Nombinnie and has sent the included photos he took on the trip. One photo is of the very common but often overlooked Galah watching a White-breasted Woodswallow inspecting a hollow is a worthwhile addition to this article as the poor Galah doesn't often make any list!