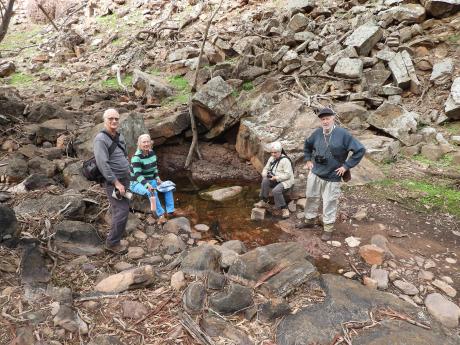 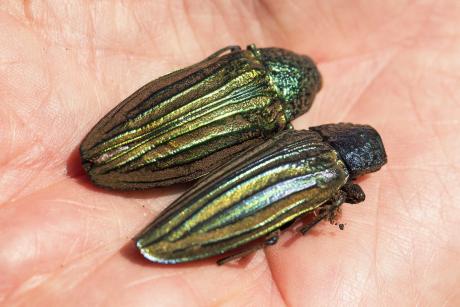 We all, for the first time this year clad in jumpers and jackets, assembled at 8.30am at Yenda for our Cocoparra Ranges outing on Saturday, March 13.

As I  alighted from the car at Jacks Creek Picnic area, I was fanned by the feather-soft, pale green fronds of a Weeping Wilga - the ‘weeping’ being my personal descriptor of this beautiful native bush - bountifully budding for a late Winter blossoming. As the bright, windless Autumn day warmed up we set off on our looped walk.

On ascending the track we were presented with a western vista of glorious green, where a month or so prior there had been only brown. The recent rains had also brought forth an array of wildflowers – ever the opportunists. Among these were the profuse white Native Tobacco, and the less abundant but even lovelier Blue Pincushions – and golden Cluster Everlasting Daisies.

Further up the hill some of us gathered to contemplate why Wonga Vines always spiraled to the right as they climbed their supporting trees. Eric soon dismantled the “Only in the Southern Hemisphere.” furphy. “Most climbers do the same thing all over the world” he tactfully explained “In fact the answer could be found right down at the DNA level, where the double helix also has a right ascending spiral.”

When we reached the top of the 300 metre hill we gazed down on a gully formed by dramatic erosion over eons along a line of weakness. The slanted morning sun illuminated the wonderful ochreine (if it’s not a word, it should be) pallet of terracottas, pinks, oranges and reds.

We were suitable awed to be standing among geologic formations, the Upper Devonian, of some 350 million years old. It was evident that the dense, heavy sandstones had suffered torturous faulting and folding in the relentless march northward of the great Australian tectonic plate.

It was the glimpse of still pools of water that quickened our descent to the valley floor. In the short time since the rains, life, both floral and faunal, had already occupied their various niches. The most endearing were the large tadpoles which shimmied away from me as I stooped to drink the clear, clean water. Ahhhh.

At several sites along the cliffs there were sizable guano falls which, Max assured us, were Peregrine Falcon nesting sites. This led to a discussion on the survival mechanisms of many if not most birds rarely revisiting nests which had been violated, especially by predators. By the amount of white staining on the rocks, these sites seem to have been secure for many years.

The rain had indeed been heavy, as there was quite a build-up of debris around the tree trunks on the valley floor; as well as mats of dried-out white foam. Perhaps the water even flooded a massive wombat burrow (more like a cave!) which was freshly excavated; probably, due to the evidence of clear spore, the previous evening.

The walk back to the parking lot was accompanied by the ubiquitous bell-like tones of a Grey Shrike Thrush, and the repetitive cheep – cheep – cheep - cheep of an Eastern Yellow Robin.

After morning tea we pressed on to Woolshed Flats. Here we were welcomed by a ‘gathering’ (my collective noun, rather than ‘flock’, for birds congregating in preparation for migration) of Rainbow Bee Eaters. This is probably the last time we’ll hear these pretty little birds for six months or so as they depart for northern climes.

And speaking of climbs (sorry, not a great segue), ours was up the massive conglomerated boulders of the nearby – to put it charitably – ‘waterfall’. The embedded river-worn pebbles were the largest I’ve seen in conglomerate rock, many over 5cm in diameter.

The whole area to me is a sedimentary sacred place.

On fossicking around these lithic marvels I spied a glint of gold among the rubble. Or was it emerald? Or topaz?

I had indeed hit pay dirt, in the form of a large beetle. It had been eviscerated by ants leaving the entire exoskeleton in perfect condition. The animal was of more lineal form than most beetles, emphasized by the head-to-rear deep ridging along its elytra – not unlike a Leatherback Turtle.

But it was the metallic sparkle in the green-yellow spectrum of this splendid Coleopteran that so excited me as I scrambled down the track to show the others.

But I was cut short by Margrit, who, holding out her hand, said.

“Look what I found.”

Yes, she had also discovered a beetle exactly the same as mine, but with the opposite but complementary spectrum; hers being mainly blue, violet and red! Double but different.

Placed together the radiant pair shone in the sun like the most precious of gems – in the full seven prismatic colours.

On returning to the car park, we descended from the gargantuan geologic - to a 2cm black caterpillar. Its beauty was only truly revealed when Margrit showed us (me at least) how to use binoculars as a magnifying glass. Merely look into the big end and go very close to the subject; as one would with a jeweller’s lense. Only in this way could we appreciate the true splendour of the little creature, including fine dorsal hairs and a disproportionately large head. With its highly-defined yellow and black markings, it looked like a voodoo mask. I’m glad it was only the size of a tack head!

As I stepped back, I observed a cluster of half-a-dozen adult men and women enthusing over a tiny inchworm. Nature does that to you.