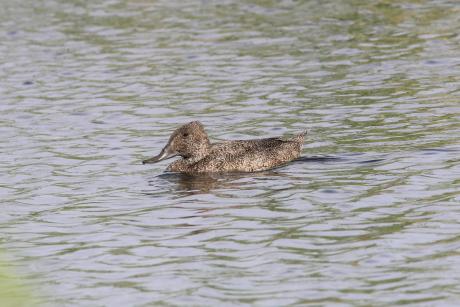 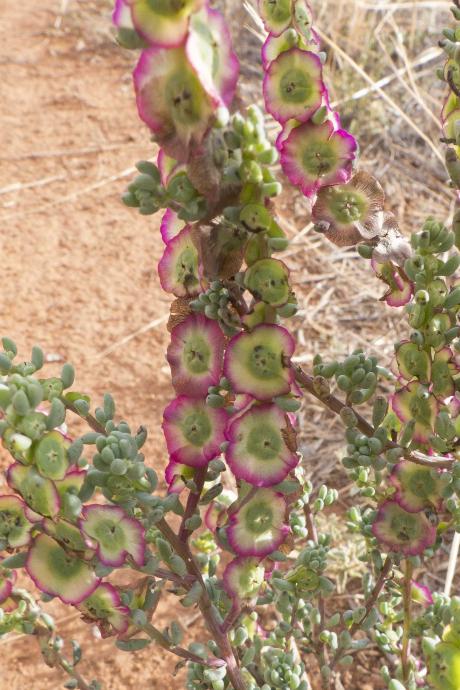 I couldn’t find Campbell Swamp named on Google Maps, so it’s no surprise that I got lost (twice) on our Saturday March 16 Club outing trying to find it – even though I’d been there (twice!) before. Some might say I have a poor sense of direction; I prefer to be thought of as a person who “investigates alternative routes”.

Having eventually arrived I found the area as life-filled as I remembered, from both a plant and animal perspective. In relation to the former, I clung to Eric like a gecko on glass, both along the entrance path and the boardwalk (more on this safety hazard later) as he described many of the species extant, such as the lignum thickets and swamp couch. Striking was the crystal clarity of the shallow water, being perennially filtered by this same aqueous flora. In some places it was the inland equivalent of coastal seaweed-adorned rock pools.

The spacious bird hide, with its information display and adjacent signage, is pretty special, and I was proud that it was a long-ago initiative of the Murrumbidgee Field Naturalists. A  hide is a wonderful place for field ornithology as, not only does it allow one to be close-up and personal with our avian subjects, but one can even chat, eat and stroll about – oh, and spy on birds of course. I leave it to Max to supply the full – impressive – list for this very enjoyable and informative outing.

Most charming for me was a close-up view of a pair of Red-rumped Parrots attending to what was probably their nesting hollow. Also a family of the elusive Freckled Ducks was in attendance. A curiosity was a less than edifying flock of feral pigeons, which seemed to be permanent residents of the wetland; their normally preferred habitats being ledges, grain silos and statues. And of course there were Starlings, always Starlings.

Even though the bird-watching hide was great, even better was a walk along the eastern track fringing the swamp. The four raptors present, Swamp Harrier, Hobby, Whistling Kite and Black-shouldered Kite (its ruby-red gaze being enough to scare its prey to death) seemed largely oblivious to our presence. However, they probably kept some of the smaller bush birds under cover.

This was certainly not the case with the male onyx-black Darter with tawny juvenile snuggling up together at their large, hemi-spherical nest, just a meter or so above the water.

Then a top sighting; three black-and-white Magpie Geese, two resting on a dead branch, the third idly poking about the shallow water for an afternoon snack. Non-flying, close-up Magpie Geese were yet another first for me.

Great as that was, the piece de resistance of the trip was a couple of Pied Butcher Birds at the top of a large, dead tree … No they’re not … White-Winged Trillers maybe? ...

But my attention was distracted by a strange brown honeyeater quite close to me. This bird then flew up to join the still unidentified black-and-white birds on the dead tree. Shortly after, when I caught up with the group, Max mentioned, with an uncharacteristic tone of excitement (after all, he’s seen everything) that he’d spotted a Pied Honeyeater a little earlier. So that was it, my mystery birds were Pied Honeyeaters, the brown bird being the female. This was later confirmed by Max when he observed five of them in the same tree. (Five to my three! This is not a competition, y’ know!)

From what I’ve read, due to their rarity one would be unlikely to see them again in ones lifetime; certainly in that area, pretty well on the eastern fringe of their arid zone range.

Now back to the rotting boardwalk: I recently visited the North Head Nature Reserve in Sydney. This is highly recommended, but one needs a whole day to really enjoy the marvelous views, history, geology and flora (though not great for birds). Of particular interest to me were the galvanized steel-mesh walkways, especially as they traversed the boggy “hanging swamps”. Why so interested? Because on our outing I was part of a discussion regarding the onerous task of replacing the old wooden walkways at Campbell.

This extremely efficient, metal, light-weight but sturdy - and it seemed low-cost, ease-of construction - solution might help solve the replacement problem. The brand name was “Rhino”.

The many reasons one immerses oneself in field natural science in general and bird-watching in particular are always nuanced; never black and white …

Well, with the outing at Campbell, with the exciting visitations of the Magpie Geese and Pied Honeyeaters, this time the reasons were very black and white – for me at least.