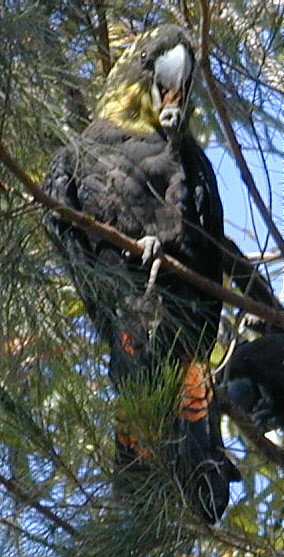 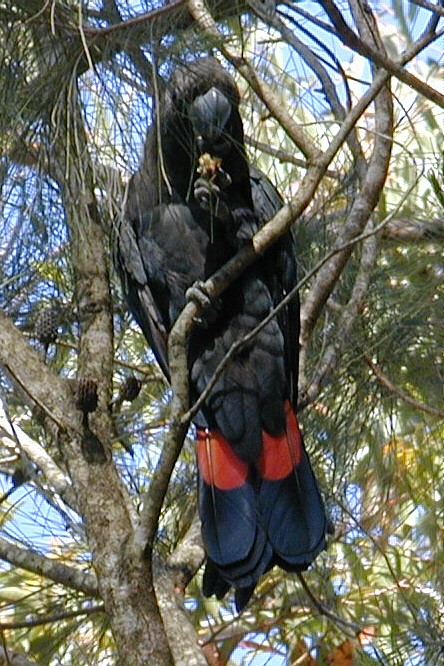 This month will see the Field Naturalists  Club organise counts in the local hills  to determine the numbers of this critically endangered bird. These birds are counted at dams when they come in to drink around sunset. There are also plans to join the group at Rankins Springs to participate for their count.  The more dams that can be covered the more accurate the count will be.

The Glossy Black-Cockatoo is a small black parrot. They feed almost exclusively on the seeds of Drooping Sheoak Allocasuarina verticillata, particularly those growing on rocky hills and valleys that have kernels in more than half their seeds. The cockatoos lay a single egg in hollows in tall trees, Grey Box, Yellow Box or Red Gum. Trees that develop nest hollows suitable for this subspecies are thought to be at least 100 years old and possibly much older. The cockatoos use both intact habitat and isolated Drooping Sheoaks and tall gums within the semi-cleared agricultural land and feed in the rocky hills nearby where the Allocasuarina is mainly found.

It often occurs in pairs, or in groups of 3, which comprise a breeding pair and their offspring . Solitary males and small groups of juvenile males are also observed, as are loose flocks, which typically consist of 25 birds or less, but may comprise 50 or more birds in the post-breeding period.

Threats are tree hollow and nest box competition.  Numbers of possums and open country cockatoos are thought to have increased as a result of clearing which are also happy to use large hollows.

Fire is a threat to the species food tree, as Drooping Sheoak takes at least 20 years to produce seed: as is the clearing of Drooping Sheoak. This means that in the Narrandera Hills that burnt in 2000 may soon be producing food. Grazing by domestic, native or feral animals can also reduce regeneration of sheoaks, as can bushfires.