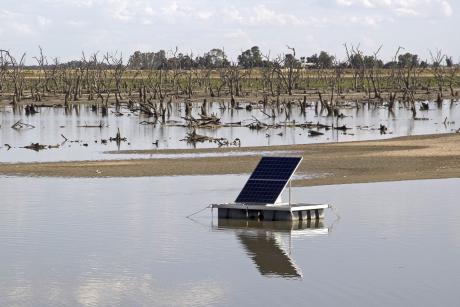 Fourteen members met at Griffith Information Centre at 3pm to pool cars and drive out to Barren Box Swamp. Just before the main gate, there were a number of rice fields in which 5 Emus were seen by the lead vehicle but by none of the others following – strange they all missed such big birds in such an unusual situation walking through water. I bet the rice farmer wouldn't be happy.

At Willow Dam 3 Night Herons were spotted in trees beside the water and a colony of Fairy Martins had a battery of nests built under the eaves of the pumping shed. A stop at the start of the main embankment failed to locate any White-winged Wrens but a pair of Zebra Finch were seen on top of a distant bush whilst a water rat was sighted in the main canal running along the edge of the water.

We slowly drove in convoy along the embankment stopping regularly to check out the birds. Two White-bellied Sea-eagles were seen perched in distant dead trees in the water along with an estimated 60+ Pelican roosting on exposed islands along with numbers of spoonbill.

Because of last year's heavy rain, the branch embankment was closed so we continued to the area where an Orange Chat was seen by the Silly Galahs Twitchathon team a few weeks before. But no luck this time. However, we were all delighted to find a family of White-winged Wrens along the edge that gave some of us a good view, albeit brief, with regards to the beautiful male.

By this time, it was getting on for 6 o'clock and most were hanging out for a cuppa break so we stopped at the northern gate and settled down for some light refreshments and a chat – well most did but others of us were more intent on trying to get some closer photos of the wrens that were flying about in the bushes close by. Both White-winged and Variegates were seen along with some distant views of some White-winged Chats. A very vocal Reed Warbler serenaded us from a clump of cumbungi near us but didn't show itself and numbers of Cockatiel were flying over to get a late afternoon drink before settling for the night.

Time was getting on so we exited via that gate and headed back to Griffith for people to pick-up their cars. In all we saw 43 species.

Thanks to Kathy Semmler for the key and for allowing the club to go to the swamp for the outing.