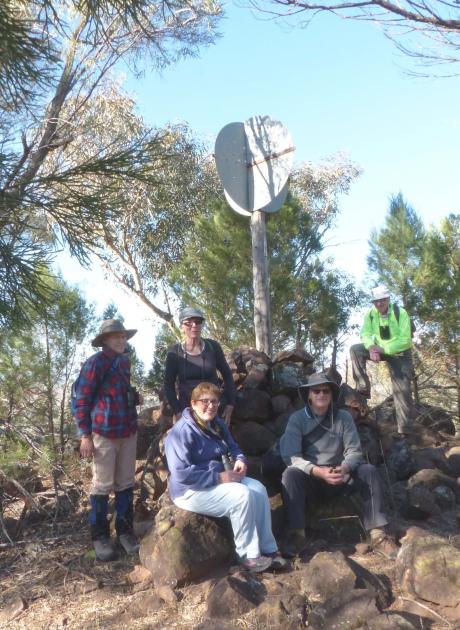 When Alan Cunningham climbed Mt Caley he started walking from near Flowerdale on the Erigolia Road.  We chose to drive from our meeting place at the junction of the Burley Griffin Way and Whitton Stock Route to the Spring Hill Picnic Ground and walk from there.

The route to the summit promises a steady climb without any tracks to follow.  Consequently six elected to stay around the picnic ground or take the formed track to Falcon Falls.  The other seven crossed the road and headed into the bush.  There is a gap in the fence to allow walking access to that part of the National Park and a small path goes through some 100 metres of Cypress Pine regrowth before petering out just short of more open country.

Out in the clearing we began to hear some bird song but the singers were rather elusive.  Even the Yellow Eastern Robin took several minutes before getting a positive identification.  It never got any better for the bird watchers despite being sunny if rather cool day. I believe those that stayed around the picnic ground had better success.

It was not long before the climbing started. The intention was to head diagonally up the eastern flank making sure we were above any of the many near vertical bluffs and not to head straight up to the ridge line so as to avoid excessive steepness.

With hardly any birds around to stop and look at, the party took to identifying the plants they passed.  It is surprising how hard it is to recognise even the common plants when they are not in flower.  It is so easy to look only at the showy blooms and not the rest of the plant.  Anyway the frequent pauses had the desired effect of easing the exertion of the relentless over generally uneven ground.  In addition several bands of harder sandstone required picking our way through steeper outcrops.

The seeking out of the various native plants gave us the first highlight of the trip – a lone Autumn Greenhood, Pterostylis revoluta in full flower.

We eventually made the ridge and for the last couple of hundred metres the way became more open and at much gentler slope.  Just beforehand though was the second highlight. Several small plants of the threatened endemic species Pomaderris Cocoparrana barely 30cm high were spotted tucked in amongst the rocks.

The summit is marked by a large stone cairn.  Alongside is a small brass plate – the location of the official trig point. However a few paces further brings you out onto a rock platform with excellent views to Mt. Narriah to the east, all the peaks of the Narrandera and Brobenah Hills round to the nearby Mt. Brogden blocking the view to the south and south west.

After soaking in the views it was time to make our way back sort of but not quite retracing our steps. But first there was a diversion to the southern approach to the summit.  It seems somebody has marked a route with tape up from the saddle between Caley and Brogden (a track leads there from Wattle Dam).  At the head of this track Rowena and I had seen several Pomaderris plants some as high as 60cm (native plants can get to 2 metres but drought and goats have wiped them out).  The party was keen to see these plants for themselves.

For the route down we chose to keep more to the ridge line.  This paid off as the way was generally a steady decline.  It was punctuated at intervals whenever we dropped down to the bands of harder sandstone.  These formed boulder bluffs across the ridge.  However each one was easy to pass around or through a break and so no serious clambering was involved.

Despite numerous stops to look at plants or lower down in order to try to see those still elusive birds we soon reached the lower slopes and the short walk across the flats to the road.  The gentle pace down was just right to get back to the picnic ground in time to join the rest for lunch.

In addition to being a celebration of the bicentenary of Oxley and Cunningham’s exploration of the area, we were also able to celebrate Enid’s 90th birthday ( a little late).  It was Enid who first led MFN up Mt Caley, in particular to the cave in the eastern bluff.  We were all pleased to have Enid present with us and hear her recollections of her times in the Cocoparras and in Yenda.  Fittingly a birthday cake was produced  for Enid to ceremoniously cut and whilst all were partaking to listen to extracts of Oxley’s report and Cunningham’s diary for the relevant days.