Into the Red Gums 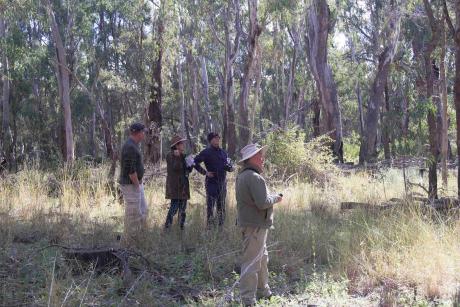 On Saturday the 29 April nine of us met at the Rotary Park in Darlington Point, the weather didn't look as good as the forecast, it was cool and overcast (later in the day it got better).  When all had arrived we headed back towards Whitton to head in to the Murrumbidgee Valley Regional Park.  We entered the park at what used to be Cuba State Forest.

As soon as we entered the park we stopped to have a look along the Billabong that is on the right as you enter.  When we stopped a few of us walked back toward the main road to check out the Fairy-wrens that we had seen on the way in, as there were no coloured males there was some discussion as to which ones they were. There weren't many birds on the water but here were raptors overhead so maybe that is why there weren't any birds on the water. There was some discussion about the control of noxious weeds based around the Noogoora Burr (Xanthium occidentale) that we saw in a few patches along the edge of the billabong

After a short walk along the edge of the Billabong we headed further into the forest and stopped on the side of the river at “Crayfish Bend”.  The first order of the day was morning tea as it was now nearing 10 o’clock morning tea was accompanied by discussion of the merits of our current economic model and the effect that this has on the natural environment.  We eventually went for a walk into the adjacent bush.  It was noted that now that there is no grazing that even at the end of summer there was a good cover of dried grass on the ground and signs that the under story of the forest is starting to re-establish, notably wattles.  Tree was the theme of the day for the birds in this area with large numbers of Brown Treecreepers and Tree Martins, all of the normal river forest birds were there also.

The river forest was its normal peaceful self and the size and age of some of the River Red Gums is something to remember, it is interesting that the largest of the Gums are along the edge of the river where they couldn't be cut down (harvested) without falling into the River.

After our walk it was time for lunch then off to our final stop for the day.  Heading south-east back along the river to a sand hill area that is covered in White Cypress Pine.  This area was a rehabilitation area behind a locked gate to stop vehicle entry so we pulled up and clambered through the fence and walked to the top of the hill.  The birders amongst us weren't overly confident of finding much but we hadn't walk far and we were of chasing birds and this area turned out to be as rich in birds as the River forest.  Other than the Pines there were Bull Oaks and at the top of the hill there was a group of very large Cooba Wattles Acacia salicina one had a trunk that was around 450mm diameter and 7 to 8 metres high, so much for wattles being short lived.

After walking back down the hill to the cars we said our good byes (this takes longer than you would think) and headed home at around 2 o’clock.  An interesting and informative day was had by all.