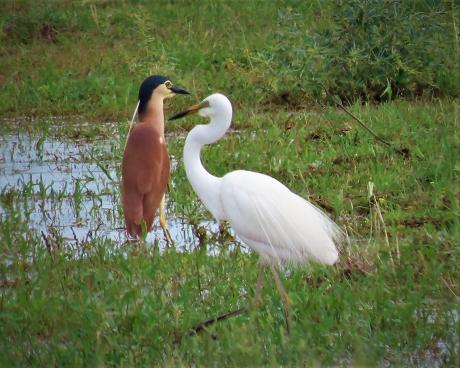 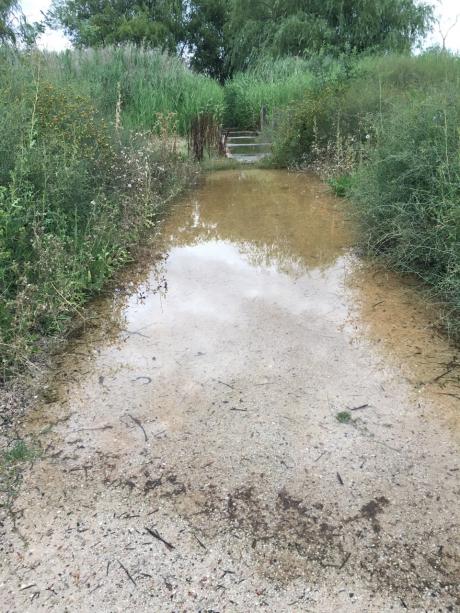 With so much rain over the past two months, all local wetlands are full to overflowing – a situation that hasn’t occurred since 2012.

I recall in early December that the water level at Fivebough was getting to a point where we might have to request eWater to be put in as Australasian Bitterns had been reported ‘booming’ there and the water had to be maintained at a good level for the birds to stay and possibly nest.

Well Mother Nature solved that problem for us, as we all know with lots of good rains over the two months that has certainly maintained the high water level in all our wetlands. Campbell’s Wetland, in particular, had so much rain in early January that the boardwalk went underwater and the walk was considered dangerous so that David Kellett was forced to install a barricade at its start (photo).

Likewise for Fivebough, the pathways were flooded in parts but the wetland was accessible with a little wading along the way. This ensured the bitterns were able to stay as the water level and massive club grass was perfect for them to set-up breeding areas and attract females with their booming. At least 3, if not 4 birds were calling in the early morning and evening, so we are hopeful that there is breeding activity taking place there for the first time in quite a few years.

As well as the Australasian Bitterns, the Australian Little Bittern (aka Black-backed Bittern) has been heard calling in the clumps of cumbungi at Fivebough so they too are hopefully nesting there.

The same isn’t the case with Campbell’s Wetlands where no Australasian Bitterns have been recorded there this season. However, the Little Bittern was seen and heard calling at several spots in the wetlands this Summer. Nella Smith also reported hearing Little Bittern calling at Rocky Waterholes in Narrandera in late November but she hasn’t been able to check since as massive earthworks are still being undertaken at that spot where she heard one calling.

Apart from few bitterns at Campbell’s, there is certainly no shortage of Ibis of both species – White and Straw-necked – there at the moment. I do quarterly surveys there and when I did the October one I saw quite a lot of nesting activity taking place with signs of both species flattening the reeds and starting to build nests. Well come to the January survey and it was bedlam, with hundreds of nesting birds there all along the wetlands. There was continuous activity of birds flying in with food for their young and some still bringing in nesting material. Lots of juvenile birds of both species were roosting in the dead trees waiting for parents to return with food for them and others were still in the nest waiting for the same attention. As a rough guess I would say there were over 500 of each species present – I defy anyone to do an accurate count as most of the nesting activity is hidden from view within the reeds. But just the sheer numbers flying in and out and roosting on the dead trees let alone all those on nests makes it impossible to count them accurately.

David via James Maguire ordered eWater for Nericon Wetlands late last year and MI started putting water in after years of it being totally dry. Both David and I did several checks over the weeks after the water was being put in but neither of us could see any indication of there being any there. However, James provided an aerial photo of the swamp and there was water visible. The grass that had grown over the intervening years made it difficult to see from our viewing point near the carpark. When I did the January survey and after all the rains, I walked down to the fence where the old hide used to be and was surprised to find I couldn’t get to within 100m of the fence as the water was well up past the fence-line!

Of course with all things in excess, the rains have had both positive and negative effects. It has helped the larger species such as egrets, herons, ibis and ducks but has not been good for migratory wading birds who prefer shallow water with plenty of exposed mud-flats, as also for the smaller birds like dotterels (Black-fronted and Red-kneed). Crakes (Spotted and Spotless) and rails (Buff-banded), on the other hand have remained and have bred successfully spending most of their time in the shallower water in the reeds close to the pathways where they can be seen venturing onto the path from time to time if you stand still long enough and wait for them to emerge. I had up to 9 Spotless Crakes come out on the southern path leading up to the settling ponds and 5 of those were juvenile birds!

Whilst the wetlands are very overgrown because of all the rain and birds are pretty scarce at times, it is still worthwhile to spend time there if you are prepared to wait for the birds to appear out of the grass and reeds. With such a wet summer everywhere this year, the birds and ducks in particular are spoilt for choice so you have to be lucky to be at one of the wetlands at the right time – early morning and late evening being the best to see what’s there.