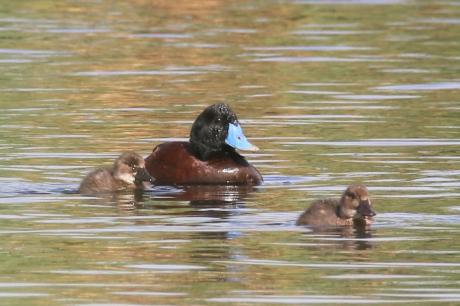 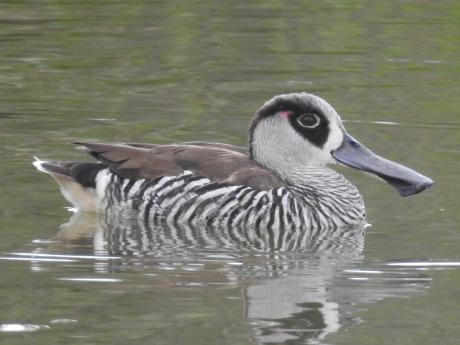 14 people made up the group for the outing. We met in the car park at Campbell's at 9am and David Kellett gave a brief talk to the group about some recent funding he had applied for and got for improvements to the track leading from the car park to the board walk and beyond along the northern section of the wetlands.

The group set off and at the start of the boardwalk, we split into two groups so as not to put too much pressure on the fragile boardwalk with so many of us going on it at once. So Nella took about half the group to the northern end whilst I took the remainder to the hide. Despite there being few ducks in the main open area as seen from the hide, with time and patience we ended up with a good selection of duck species as they eventually emerged from the cumbungi clumps and out into the open water. Blue-billed Ducks were definitely the highlight for us as up to 4 males were seen along with a couple of females. Musk Ducks were also great to see and there were 2 juvenile birds seen along with a resplendent male close to the hide showing his leathery lobe (dewlap!) quite clearly for all to see.

The purpose of this lobe is used in the mating season when the male inflates the lobe allowing him to produce a long whistle and this accompanied by him splashing the water to attract a female. It is quite a ritual and is easy to observe in the spring mating season.

After an hour or so, the two groups swapped positions and my group headed for the northern end of the wetlands. Unfortunately, the edge of the swamp was obscured by very tall weed growth so it was quite difficult to get a good view of any birds close in to the shore. In the open water we could see swans, ibis, spoonbill and pelicans.

Back at the car park, Nella's group had already settled into morning tea so my group joined them. Alan saw a Wedge-tailed Eagle in the distance whilst we were sitting enjoying the break.

From Campbell's, some of the group left for home whilst the rest went to Nericon Wetlands for a look. There was very little birdlife to be seen save for the wooded area along the roadside with some honeyeaters and babblers.

Nella, had suggested we then go to Beelbangera to meet up with Michelle Groat who was going to meet us and show us the wetlands on the rice farm at Myall Park. Unfortunately, I and a couple of others sped off leaving Alan and Susan behind and when I realised this and turned back Alan had already gone towards Griffith instead of going off to the left towards Beelbangera. My deepest apologies to them both for this oversight on my part.

At Beelbangera the remaining group had a coffee and cake before Michelle came to guide us to the rice farm. It was an amazing sight with birds everywhere. That's where they all were gathered not at Campbell's but at the water storage dams that had recently been formed by draining the rice fields on the property – quite a sight to see such a large gathering of ducks, egrets, spoonbills, pelicans and grebes all in the one expanse of water. It wasn't that the birds were unusual, it's just there were so many.

Nella, in her car saw a Great Crested Grebe but we, in Michelle's vehicle missed it. We were more intent on checking out the birds of prey flying around – mostly Swamp Harriers it turned out. After circumnavigating the various storage dams, we headed back to Beelbangera to our cars and headed for home. The bird list for Campbell’s is below.