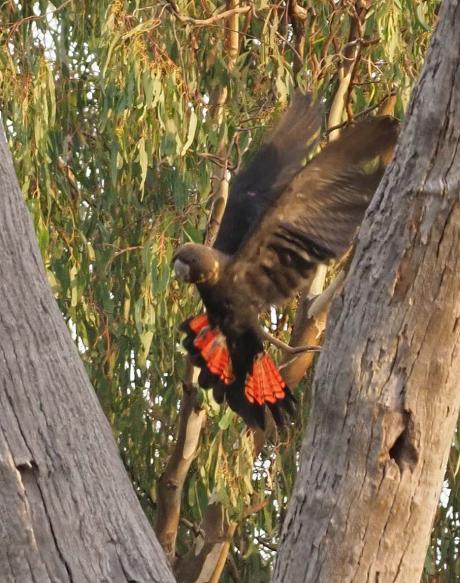 The Count was conducted a few weeks later than usual. We all probably wished that we hadn’t done it at all when the wind blew up and bent the trees in half.

I think that this year we were counting breeding pairs and perhaps a young one hanging around from last year (maybe to learn the ropes). This thinking makes it more significant than ever.

One pair from the Narrandera Hills is already nesting which makes it an early starter.  Most birds have already paired up and are getting ready to nest by finding a hollow that she approves of. Some of the birds in Rankins Springs are just getting going. When she finds a suitable nest, she finally lays her one maybe two eggs. She stays in her hollow and he comes past and feeds her every evening. She’s hanging out for a feed by the time he comes and starts calling. This could also be so that he doesn’t get lost.

The birds I saw were not at the dam, I came across them as I was driving home.  I think they fly around early in the season and check out potential nesting sites. Many of the pairs nest in great old tree hollows, dead or alive, often near water and they often nest in clusters.

A great effort was put in for the survey this year. Of the 16 sites surveyed in Brobenah, Narrandera Range and Cocoparra National Park 6 dams yielded none. (not counting Rankins Springs). A nil result is still a result. It simply means that they are not feeding around there at the moment. These are wild birds and we actually don’t know where they would be on Saturday night.

Some interesting sightings included 70 Wood Duck at one dam and a list good enough for a wetlands.

Glenn spied a koala swinging in a tree in unison with the wind at a dam near Narrandera.  Probably 13 km from the river!  Was he/she lost?