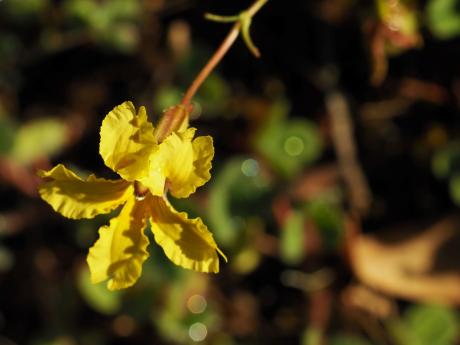 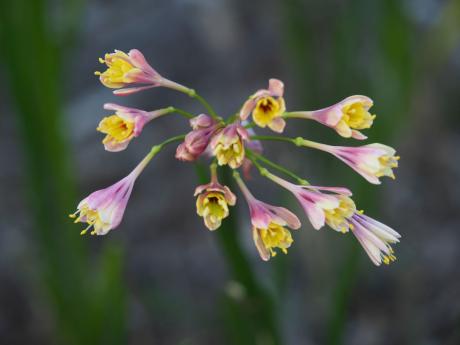 These sunny autumn days are great to explore the natural areas around Narrandera. The wonderful  thing is that you don’t have far to go just to get to the Flora and Fauna reserve (the Common) and the Narrandera Regional Reserve with the Murrumbidgee River floating past.

Even the Travelling Stock Reserves near Narrandera are great floristically. And if you know what you are looking at you come to realise that most of the plants are native.

The Autumn rain and the warm conditions have caused some triggering of unseasonal flowering after our long dry spell.

The Sticky Everlasting a yellow paper daisy can be found on the roadsides. Lower to the ground you can see another yellow flower that resembles scrambled eggs. These are Goodenia genus and there are about three different species about, a tiny one, one that scrambles and one on a long thin stem.

Two purple flowering daisies can be found. One has hand shaped leaves and will leave you with little burrs in your socks. This one is commonly called Burr Daisy!!

The other shorter purple daisy has fine leaves and can be white or pink and much sweeter.

Some of the travelling Stock reserves have different species of sunrays and also a Bottle Washer called a Ptilotis which is worth looking for. Even the local wattles like the Western Golden Wattle seem to be a bit confused and look like they are budding up.

In some cooler wetter areas there has been a great flowering of a tiny ground orchid called Parson’s Bands named because the petals look like the collar of a cleric.

Earlier in March we had a great display of Garland Lilies around the Rocky Waterholes area with flowers ranging in colour from pink to maroon and white and yellow. Best display we have seen for years.

Our best flowering time for native flowers is spring so keep exploring the natural areas.

A book called Wildflowers of the Narrandera and Cocoparra Ranges which has a picture and short description of many of the flowering plants which are found around Narrandera is available from the visitors centre.     Nella Smith