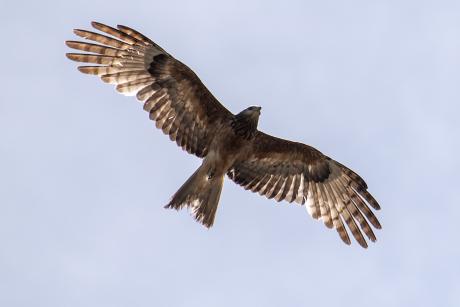 On November the 16th a group of us gathered at the Lions park in Darlington Point in preparation for an excursion into the Murrumbidgee Valley National Park at the Cuba entrance.  It was a very cool morning for the middle of November so there was some exchange of jackets before we headed the couple of kilometres back toward Leeton to the Cuba Forest.

We turned off the road and as soon as we were over the grid and into the National Park proper we pulled up to walk along the billabong that was in the process of being filled up with what I presume is Environmental Water.

The big birding highlights from this 1st stop were the 100 plus ducks that flew off when we first arrived, the lack of water birds present (may be because they hadn’t yet found it as it was still filling up), and the nesting pair of Brown Treecreepers. The other notable from this stop was the series of blue ear tags nailed to some of the trees.  These where associated with silver insulation tied around the tree.  An email to Charles Sturt University, Institute for Land, Water and Society after I got home confirmed the suspicion that the ear tags were markers for a research project.  To quote from the email that I received back from Dr Damian Michael Senior Research Fellow, “The ear tag should have been accompanied by a silver cover which I am temporarily using as an artificial bark cover to examine arboreal lizard populations across the Murrumbidgee catchment. The tag is identifying the tree.” I am going to follow up further to see if there is more information available in relation to how long and if there are any preliminary findings yet.

Our final stop for the day was at the sand hill further east for lunch first and then a walk in the Cypress pine up to find the very large Cooba Wattle Acacia salicina that we found the last time that we visited, it took a while to find because it wasn’t quite as high as it was last time.  It had fallen over but was still alive and thriving.