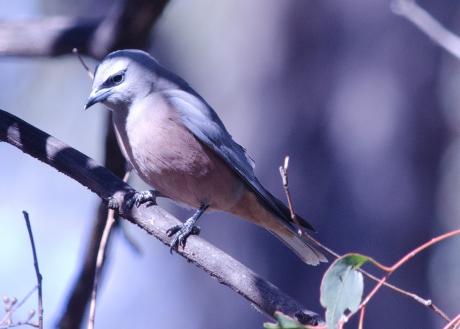 It is one of only three reserves that contains the critically endangered ecological community “Mallee and Mallee-Broombush dominated woodland and shrubland, lacking Triodia”.  There have been 26 endangered animal species recorded in the reserve some of these have become extinct within the reserve over the last 30 odd years, these include Malleefowl, Chestnut Quail-thrush, Gilbert’s Whistler and Southern Scrub-robin

We all met at 8:30 and after an hour and a half in the car it was decided that a cup of tea was required.  While we did this the first three birds made their appearance. Once we had finished our morning tea we headed off, planning to walk to the north east corner of the reserve and then walk down the dry water way that travels diagonally to the south west corner.  We found the first of the three dams that are along this waterway but I led everybody up a wrong gully and we found ourselves at the fence line on the northern side so we headed back south looking for the water course, we missed it again so had to head back the other way.  Missing the waterway was not that bad a thing as in this part of the reserve we picked up around 10 birds for the list and walked in and out of both the Mugga Iron Bark/Grey Box/Cypress Pine Woodland and areas of Broom Bush/Mallee Shrubland.

While we were finding our way back to the waterway we came across a flock of feeding White-browed Woodswallows.  This was a new bird for some in the group so we spent some time watching these and noticing the difference between the males and females.  It was interesting to note that while we were looking at the Woodswallows there were no other birds so maybe they had pushed everything else out of the area that they were feeding in.  After we had finished watching the Woodswallows we found our way back to the water way and continued along its course until we could see the fence at the south western corner.

There was some debate on if we would jump the fence and walk back up the road or if we would bush bash our way to the cars straight back through the reserve. Decision made we headed into the Mallee and Mallee-Broombush, this lead to a zig zagging route back to the cars without much to see other than the broombush that we were working our way through.  Birds where few with the exception of a Grey Fantail.  Eventually the bush opened out and the going was a bit easier

By the time that we got back to the cars everybody was looking to eat so we grabbed our lunch and chairs and walked a couple of hundred metres back into the reserve to sit in the sun and eat.  There were lots of birds around as we ate lunch and it wasn't until then that we noticed the Quandong

When the food and discussion was finished we said our farewells happy with the bird list even if we didn't get any of the mallee birds that we had hoped to see and content with having spent a day in the bush with good company having seen a vegetation community that we hadn't seen before.