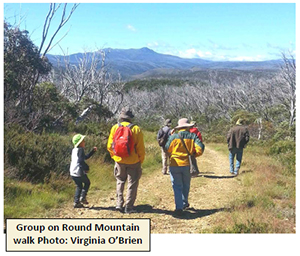 The January outing to the mountains started with the arrival of the 21 participants by 1pm on the Friday (16th) – well most of us did – there were 4 Griffith ladies who arrived a little later!

I arrived around 11.30am at our Scout accommodation and was immediately attacked by masses of March Flies, an attack that persisted the whole time we were there – there were millions of them!

After everyone found themselves a room and made their beds and had lunch, we headed past Mt Selwyn to Three Mile Lake to explore the Goldseekers Track nearby. The walk was a very good start to the weekend as it was reasonably easy and helped us acclimatise to the change in altitude. A few good birds were seen and lots of wildflowers were blooming all along the track - see Virginia's report re the alpine flowers identified. Best birds were Flame Robin and Grey Currawong.

The weather was clear, cool and windy but it didn't affect us on the walks during the weekend. Back at camp the other ladies had arrived after missing the turn into Cabramurra it seems.

One surprising highlight for everyone was the attendance of an 8 year old boy. His grandfather, Richard (Dick) Green contacted Penny the week before the weekend to ask if he could join us from Wagga and bring along his grandson, Andre. We agreed as long he took full responsibility for the boy. So they arrived and it took all of 5 minutes for Andre to have us all intrigued by his interest in nature and his fascination with everything – flowers, birds, trees, March Flies everything. He was an entertainment and joy to have in the group and he even managed to get Melanie, Virginia, Andrew and Barry as well as his grandfather out onto the oval for a game of cricket! He obviously is used to being with adults as he had everyone involved in what he was up to – such a privilege for us to have him join us and I commend Dick on such a wonderful young boy. Dick also talked to us on the Saturday night about the aboriginal heritage of the area as well as identifying a few plant specimens collected during the day's walk.

Catering, as usual, was wonderful if not excessive and thanks to Ana, ably assisted by Penny, who provided a wonderful dinner on Friday night. Not to be outdone, Neil and Johanna prepared an enormous delightful dinner on Saturday night. They are probably still eating the left-overs!!

Thanks to them for making the camp such a gourmet experience.

Saturday morning we met at 7am for a pre-breakfast walk in the town and nearby bush. Thrills galore when a flock of Gang-Gangs suddenly appeared from lower down the valley and entertained us with their antics for an hour before flying off to feed elsewhere – see Graham Russell's photo.

After breakfast and lunches made, we set off in a convoy towards Khancoban stopping off on the wall of the Tumut Pond Reservoir for a quick look over the long drop. Next was the walk to Round Mountain Hut which was a challenge for some – me!! Some of us chose not to make the final descent to the hut itself but wandered back to the car park and waited for the others, holding the car keys!, to arrive back for late morning tea/lunch.

A further drive down towards Khancoban to the Clover Flat Picnic Area in the hope of a lyrebird was a little disappointing once there. Despite there being no lyrebird we did hear an Eastern Whipbird calling and found the nest hollow of a pair of Spotted Pardalote. They obviously had young as the parent birds returned frequently to the tree near us carrying food and would fly down to the hollow in the grass. Unfortunately for the photographers, the beautifully marked male bird hid in the foliage whilst the female sat in the open in the nearby tree allowing for photos.

Back at camp, Neil and Johanna got to work in the kitchen whilst others went with Andre to the cricket match and others, like me, got out the nibbles and vino!!

The early morning walk on Sunday was along the cross-country ski-tracks at the transmission towers just out of town. It was good as the wind had dropped and the day was clear and calm.

Thanks also to Neil for planning the outings and leading the convoy to various spots for the walks. Breakfast, clean-up and packing followed and Richard showed us some old maps of the area that had been surveyed in the late 1950s showing geology and vegetation distribution for the whole of the Snowies.

I'm sure everyone had an enjoyable weekend and thanks to Penny for all organisation beforehand.